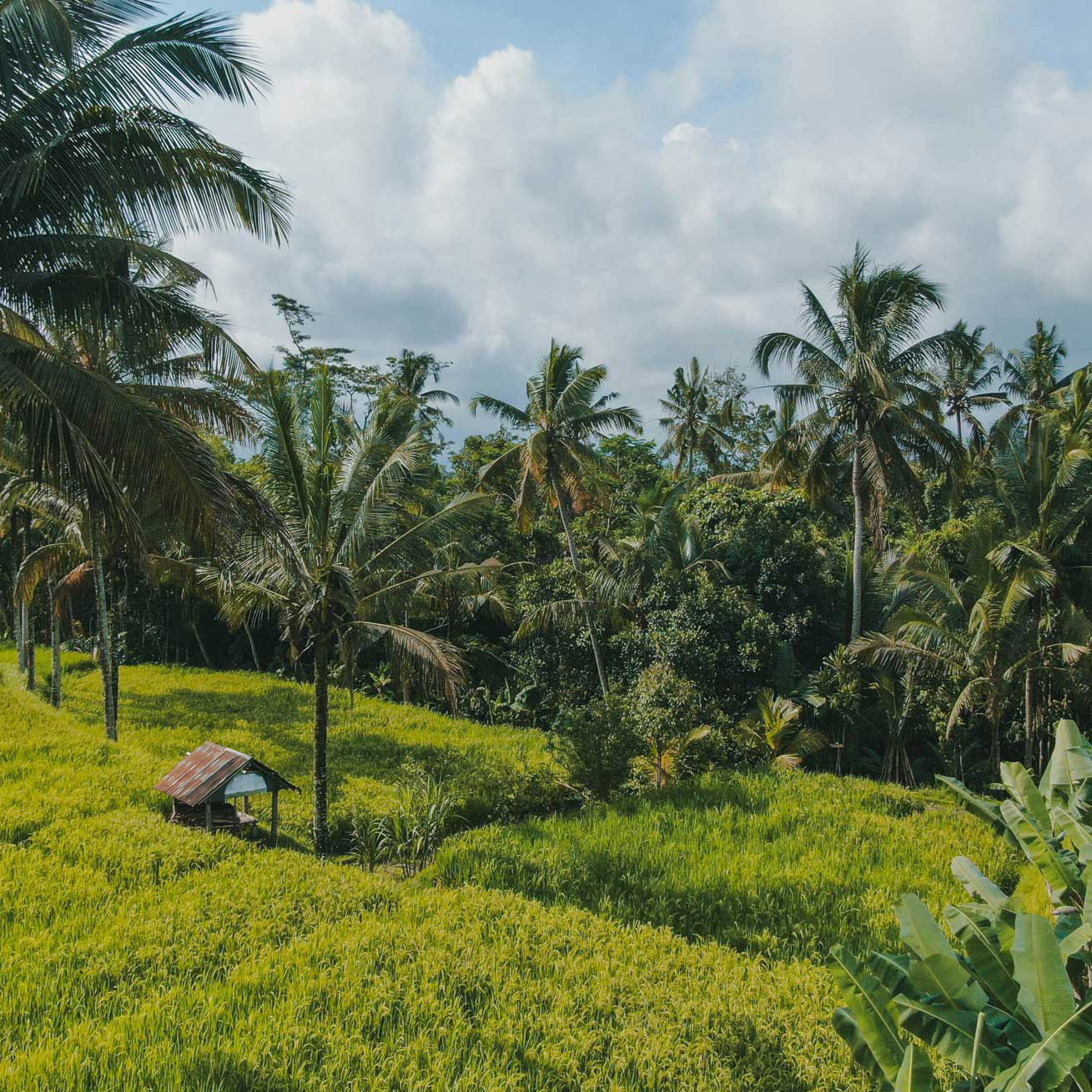 Agriculture, particularly rice farming, is strongly linked to Bali’s social, cultural, and religious way of life. Subak, the water irrigation system on which the rice cycle is based, was introduced in Bali over a thousand years ago. As early as the 9th century, some inscriptions referred to irrigation water tunnels and canal builders that worked to supply the much-needed water throughout Bali from the mountain lakes. Over the centuries, these builders have honeycombed the island with their tunnels and terraces. This system, for the irrigation of rice fields, is the bedrock of Balinese agriculture and, by extension, Balinese life. A complex social system has evolved around temples, local rulers, and farming communities. Water temple priests who practice Tri Hita Karana Philosophy, a self-described balanced relationship between Humans, the Earth, and the Gods, are in charge of this traditional ecologically sustainable system. However, much of the traditional agricultural system, including the Subak, has shifted significantly since the Green Revolution. With intensive use of agrochemicals, the rice yield increased from 2 crops yearly to 3. However, that productivity has resulted in damage to the soil, the environment, and the wider ecological system, as well as pushing the farmers to be highly dependent on chemicals. The excess agrochemicals run into rivers and ultimately into the sea, destroying offshore corals. Steven Lansing, an American anthropologist, has studied this situation since 1985.

The goal of Begawan’s farming program is to establish productive, regenerative agriculture in Bayad, Melinggih Kelod, Payangan, Gianyar, and Bali as a whole. We have three main objectives: to assist local farmers in making the shift to regenerative agriculture practices, to educate people about the importance of agriculture and how it can serve them better, and to work with farmers to produce quality agricultural products with a higher value and profit return. This farming program includes regenerative rice farming, organic gardens, livestock, poultry, aquaculture, beekeeping, butterfly & insect farming, vermiculture, and composting. The first project of the farming program at Begawan is rice cultivation within 5 plots of our local farmer’s rice fields, covering 42.90 Are. Our aim is to regenerate these fields, moving from conventional hybrid rice farming to the production of organic rice, using only natural fertilisers and pest controls. It is our goal to change one field at a time, one farmer at a time, to regenerative agriculture. As a commitment to the protection of local heritage food produce and food biodiversity, our local farmers only plant Balinese heritage rice.

Method
Composting
After decades of extensive and intensive use of agrochemicals in agriculture, soil, the environment, and rice productivity have been disrupted. Before commencing the new rice cycle, we regenerated the soil health, nutrients, and microbes for better rice productivity by adding natural compost to the rice fields. After the first ploughing, our local farmers incorporated over 20 tons of compost into the rice plots.
Water Filter for Subak Irrigation
The excess of agrochemicals from conventional rice farming upstream is carried downstream by the Subak water that irrigates Balinese’s rice fields, and terraces. It then runs into rivers and ultimately into the ocean, destroying offshore corals. To counteract this, our local farmers installed a subsurface water filter for the Subak water that enters our rice fields to treat chemically contaminated water using Vetiver and Water Hyacinth. With the capacity of these plants for fast growth, wide adaptability, and strong resistance, extensive research has acknowledged their “super absorbent” characteristics suitable for restoring polluted water.
Seed Selection
Selecting good quality seeds is important, and the goal is to reduce the mortality rate of the seedlings which are to be planted in the rice fields. Quality seeds ensure that the seedlings will be more resistant to environmental challenges, pests, and diseases. It is difficult to determine seed viability with the naked eye; hence we use the floatation method to separate sunken grain seeds that have a high potential to germinate, from the floating empty grain seeds.
Nursery
Instead of establishing the nursery bed directly into the rice field, we created a root barrier or layer using a tarp to prevent the seedlings’ roots from going deep into the mud. As a medium for the nursery bed, we use a mixture of compost and sand. Later, we laid activated coco-peat (coco husk) over the seeds to keep them moist while protecting the microbes in the compost from direct sun exposure and thus reducing evaporation.
Planting
We focus on planting young 12-day-old seedlings to minimise shock during transplanting to the rice fields. A wood forked rake was used to mark the planting position and distance. Planting 2 to 3 seedlings in one spot, we ensured that if a seedling died, there were more seedlings to grow in that one spot. The field was then mulched with cocopeat.
Natural Fertilisers, Pesticides, Herbicides
Our local farmers create and use organic fertilisers, herbicides, and pesticides in our rice fields using natural plants readily available in our location. In addition, our farmers carry out manual weeding regularly using a hoe, a sickle, and pulling out weeds by hand. We have also introduced ducks, which tear up weeds, prey on pests and leave their manure behind as organic fertiliser for the rice plants and the soil. 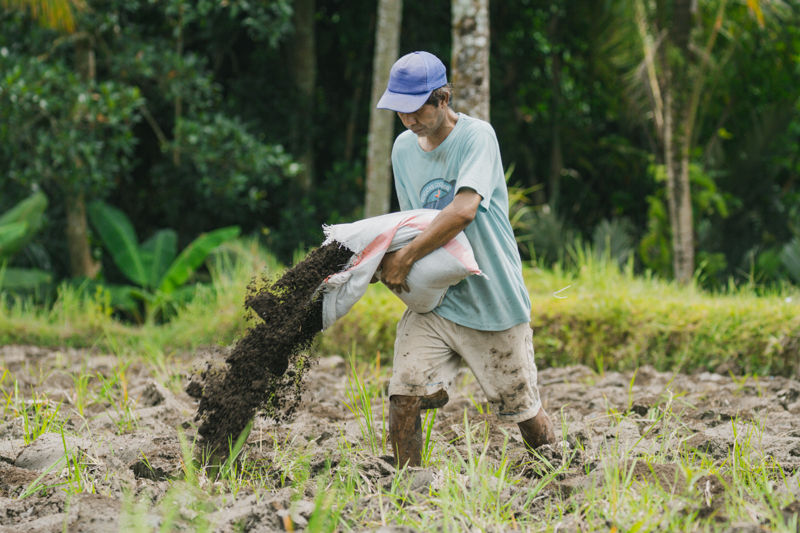 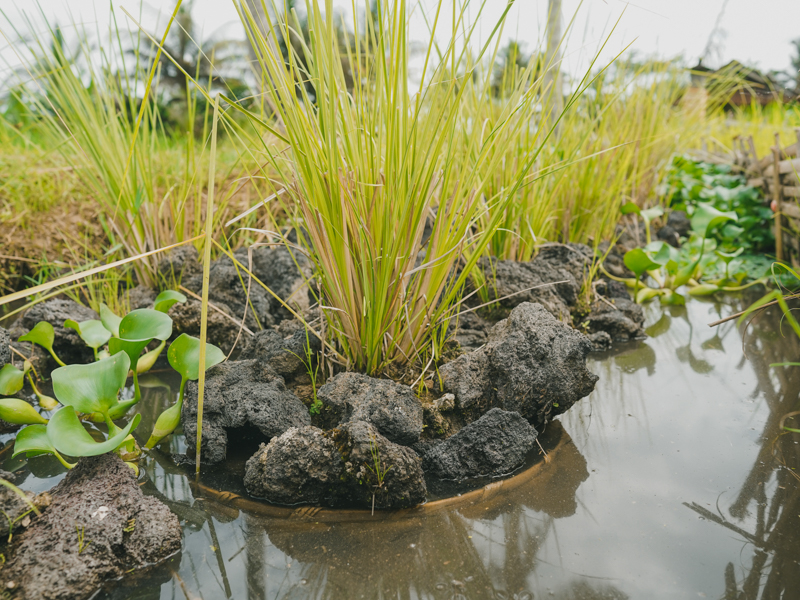 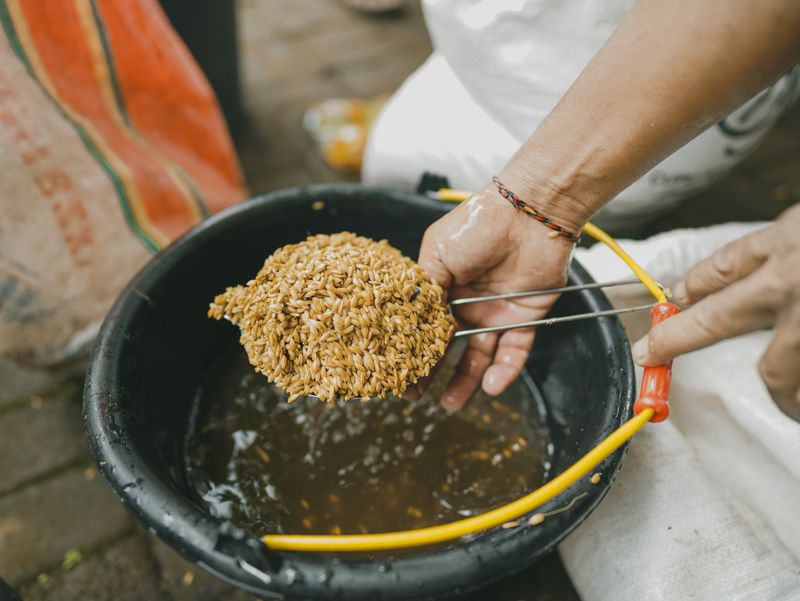 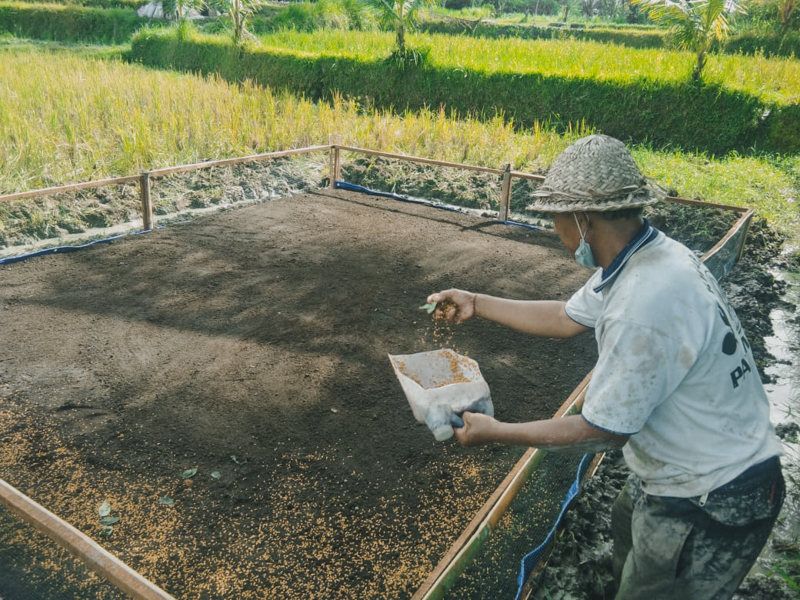 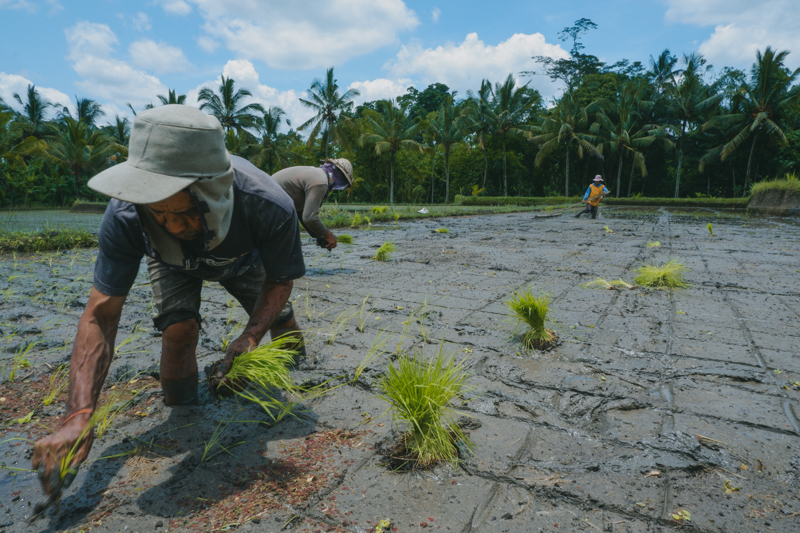 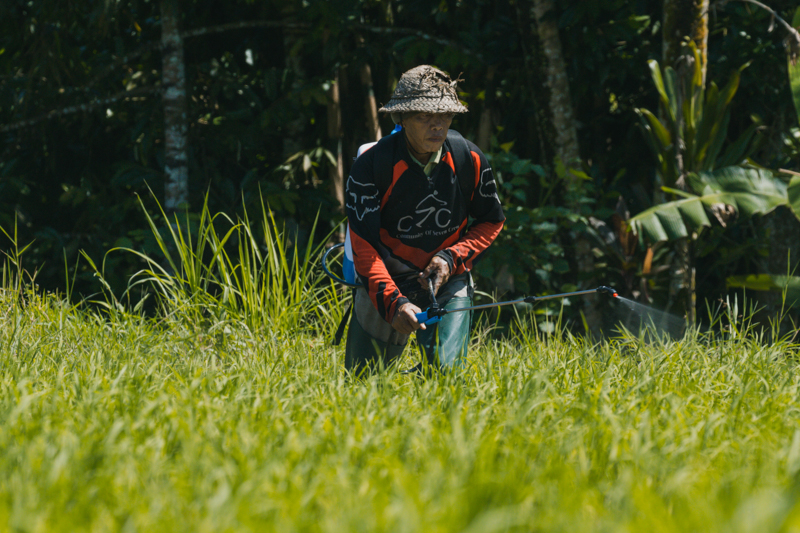 Visit Begawan Farm and Rice Fields
Experience a stage in the process required for rice to journey from seed to table. Realise how much effort and knowledge are needed to produce every grain of rice. You will understand the know-how Balinese farmers have acquired over generations. The journey is nature-based, with authentic experiential sharing and learning with local farmers. Depending on the rice cycle, the farmer may be ploughing the rice fields with buffalo for the next crop, setting up seed nurseries, planting young shoots in the flooded fields, or even harvesting the ripened grains. The ducks, working as natural pesticides and fertilisers, may be eating worms and bugs in the rice fields. The crucial role that rice plays can be gauged by the religious importance, and the diversity and number of rituals, offerings, and temple ceremonies presented to Dewi Sri, the rice goddess, accompanying each stage of rice farming. It’s backbreaking work, and your experience out in the rice fields will give you a new appreciation of the grains you buy at home. 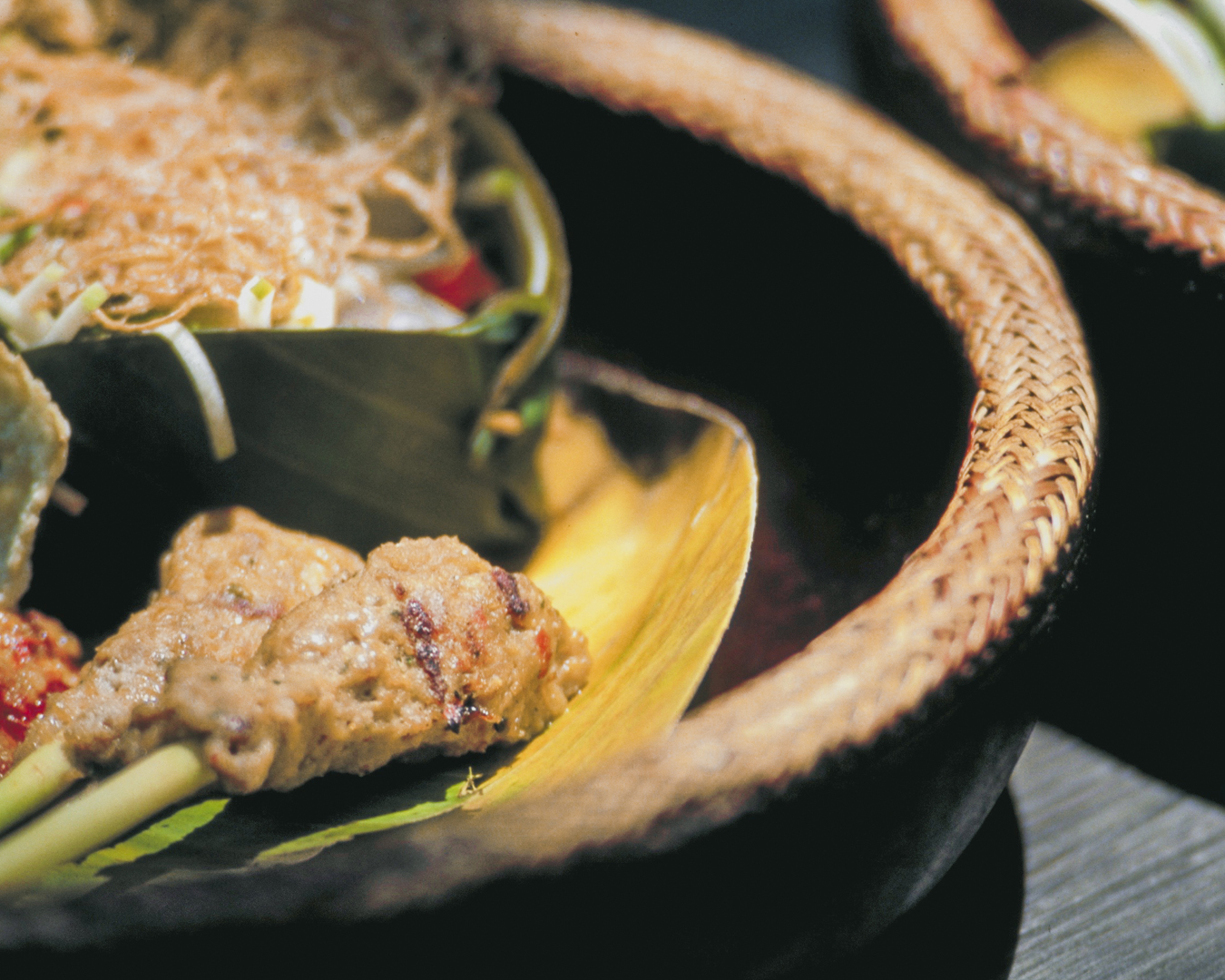