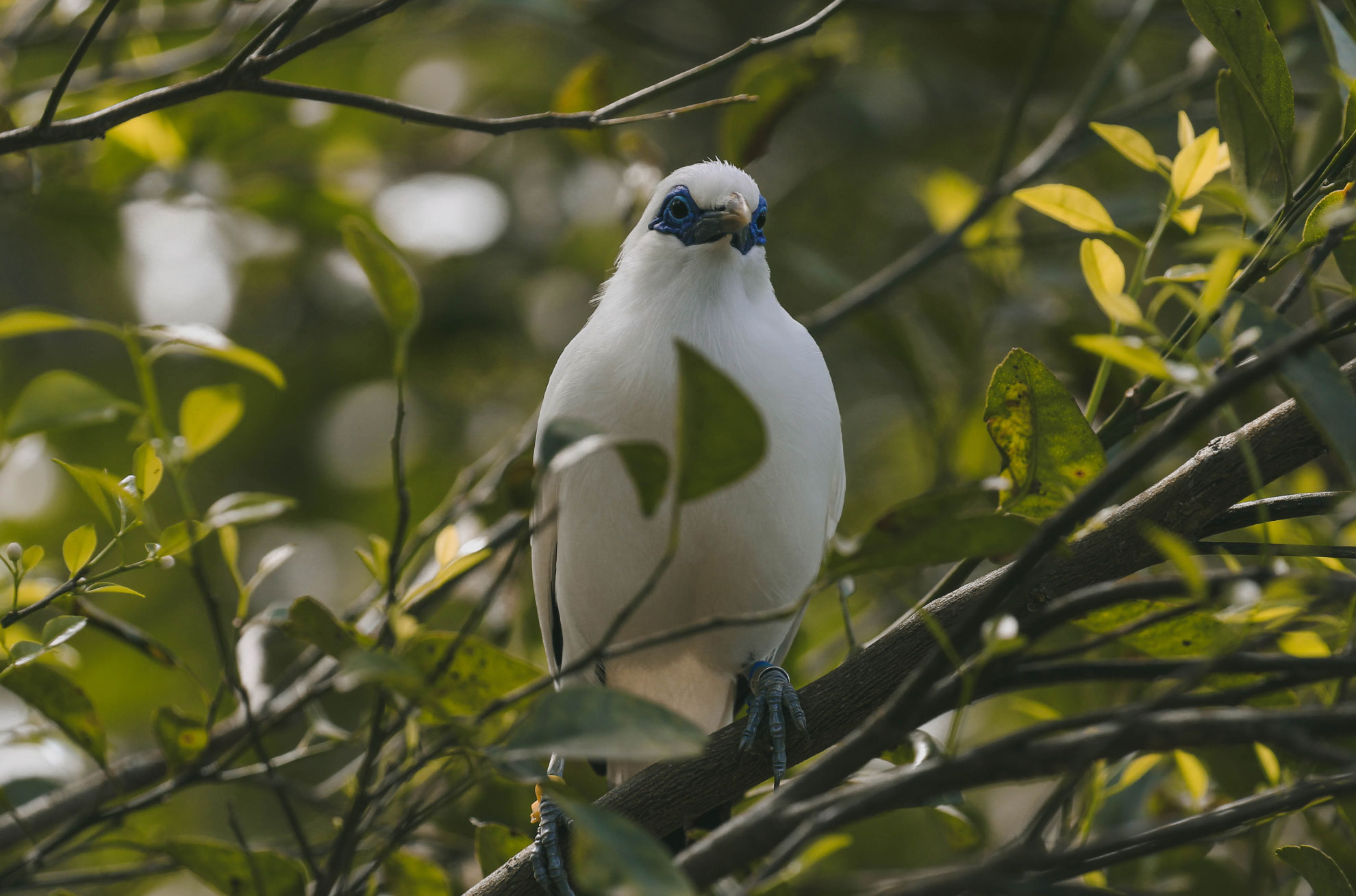 Begawan’s first initiative, the Bali Starling Conservation Program, was launched in 1999 with the goal of saving this critically endangered bird from extinction.

The Bali Starling, also known as Bali Myna, Jalak Bali, and Leucopsar rothschildi, became the official mascot of Bali province in 1991. It is well-known for its beauty as well as the very real threat of extinction. The Bali Starling has bright white feathers with black tips on the wing and tail feathers, as well as a long drooping crest. The most amazing feature of this creature is the beautiful bare blue skin that surrounds its eyes. These birds’ beauty and gentle, trusting nature have worked against them, making them prized catches for poachers. Local and international demand resulted in a significant decrease in its numbers.

Begawan commenced its Bali Starling Conservation program in 1999 when the Gardners purchased two breeding pairs from the aviaries of a successful breeder in the UK and brought them “home” to Begawan Giri Estate in Bali. Four birds became 97, with new bloodlines introduced from different breeders in Bali.

In 2005 all Bali Starlings and their enclosures were transported to Nusa Penida for the first release programs. In 2006 and 2007, 65 Bali Starlings bred by Begawan Foundation were released. In 2010, the foundation relocated all remaining captive birds and their enclosures to Sibang, a village near Ubud, to begin a new breeding program in preparation for a mainland Bali release. Between 2012 and 2014, 16 birds were released in Sibang.

In 2018, the decision was made to relocate the birds to their original breeding and release centre in Begawan, close to the main office and the foundation’s Learning Centre. The community-based conservation program, centred in Banjar Begawan in Melinggih Kelod Village, is open to guests, breeders and the local community.

Begawan concentrates its Open Community Learning program in one village, Melinggih Kelod. In 2021, the community arranged and released three pairs of Bali Starlings from family compounds. Early in 2022, a further breeding pair was released at a community compound and a small flock of free-flying birds has now been released, providing young wild-born chicks with a flock to join.


The Conservation project commenced at Begawan Giri Estate with two breeding pairs imported from the UK to be housed in purpose-built breeding enclosures. The foundation took a professional approach to its breeding and conservation project, providing excellent facilities to improve breeding success. 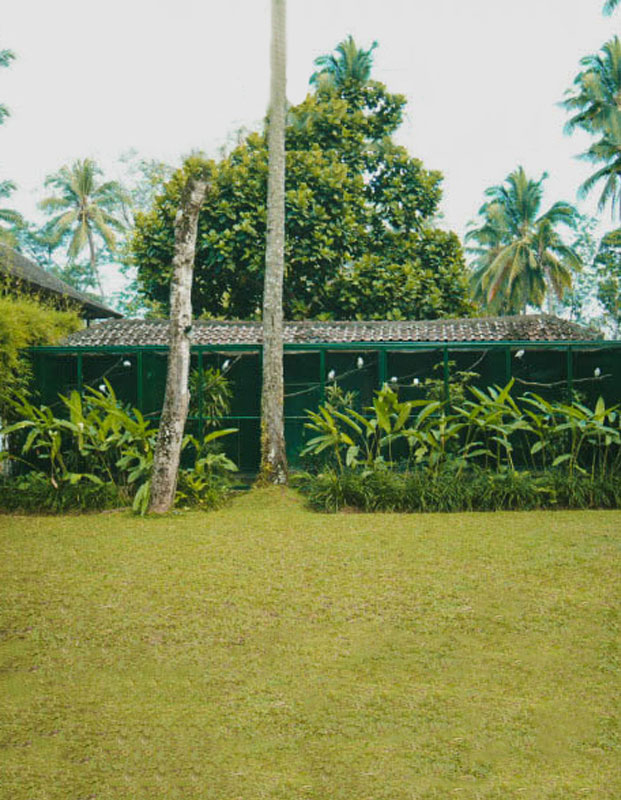 2005
By November 2005, the captive population had increased from 4 to 97 birds. Several exchanges were undertaken to increase the bloodlines of the breeding birds.

The birds and their enclosures were relocated from Begawan Giri Estate to a newly established bird sanctuary in Nusa Penida, a small island south east of mainland Bali. 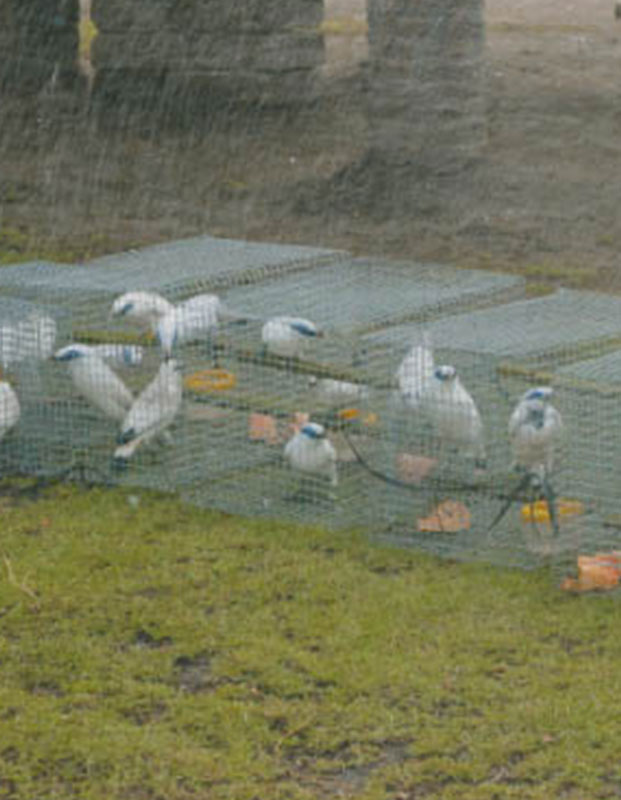 December 2006
12 more birds were released, to be joined by the offspring from the first release. A small flock was created! 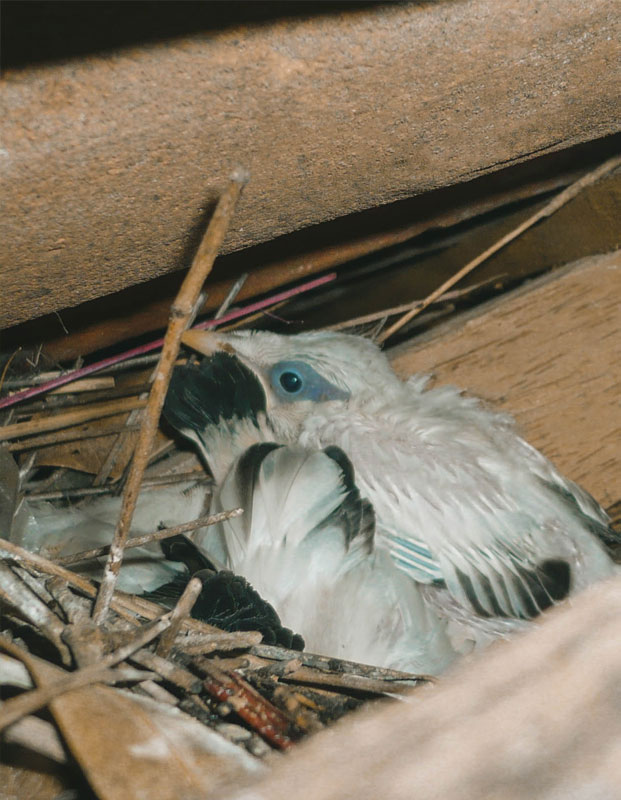 2007
April 2007
President of the Republic of Indonesia, Susilo Bambang Yudhoyono, and First Lady Kristiani Herawati released 12 more birds during a ceremony to launch the ferry service between Nusa Penida and the Bali mainland.

During 2006 and 2007, a total of 65 birds were released from the Begawan’s captive breeding enclosures. Since the initial release, by 2021, approximately 180 birds have been sighted and counted on both Nusa Penida and Nusa Lembongan. 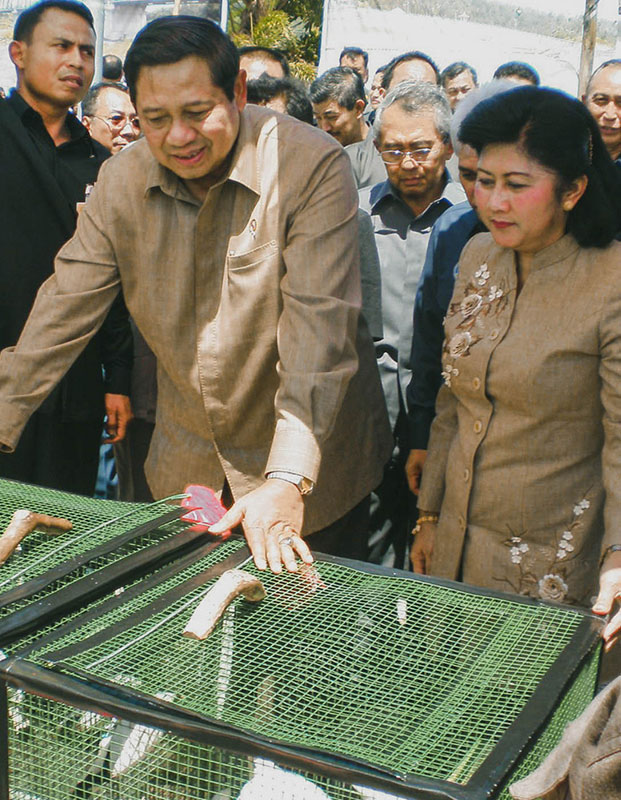 2010
August 2010
The remaining captive birds and their enclosures were relocated to Sibang, a village near Ubud, and a new breeding program was launched.

They arrived in Sibang under official government escort from Nusa Penida. 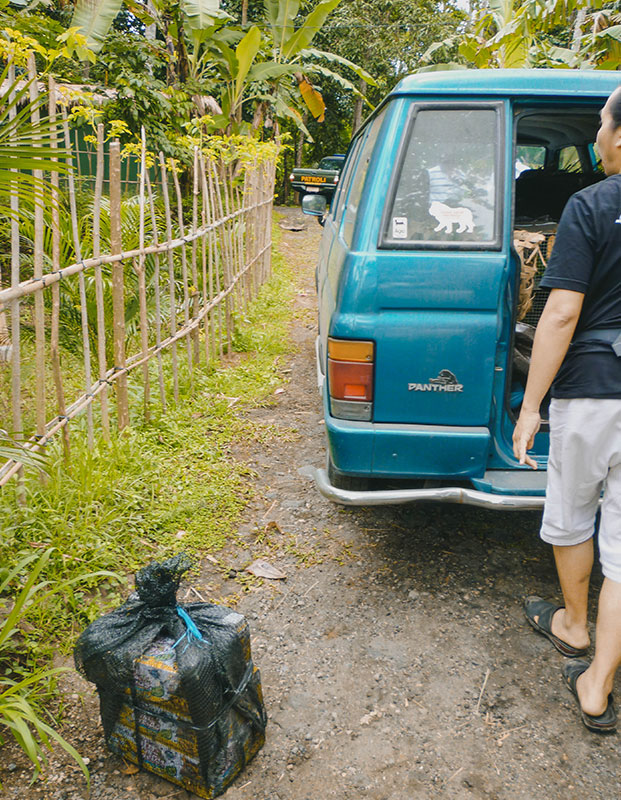 2011
23 Bali Starlings were donated to the foundation’s breeding program in 2011. Three birds were donated by Jurong Bird Park, and a further 20 from members of the European Endangered Species Program. These contributions meant that new genetic lines would be introduced from the imported birds. 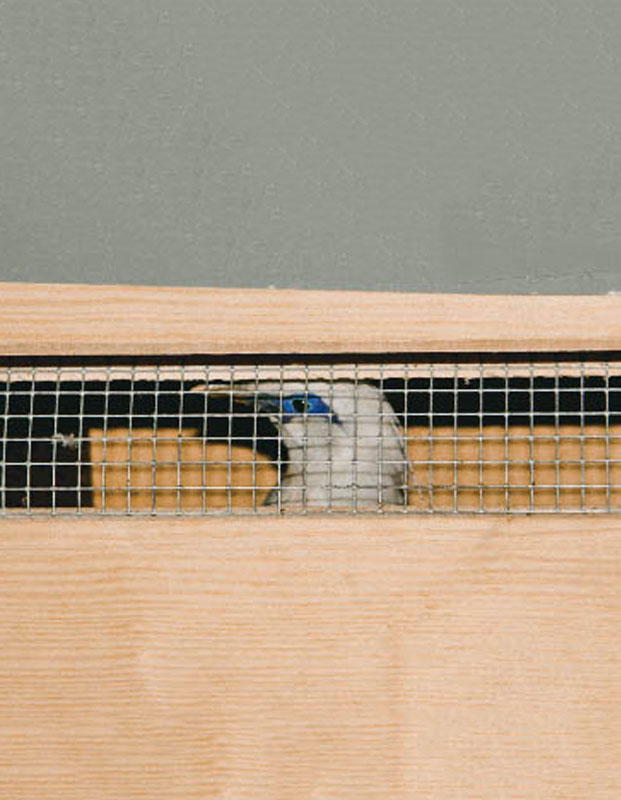 Wise words came from Tamen Sitorus, head of the Natural Conservation Agency (BKSDA) in Denpasar, “Besides breeding, we should also focus on preserving their habitat and empower surrounding local communities to minimize threats against the birds.” 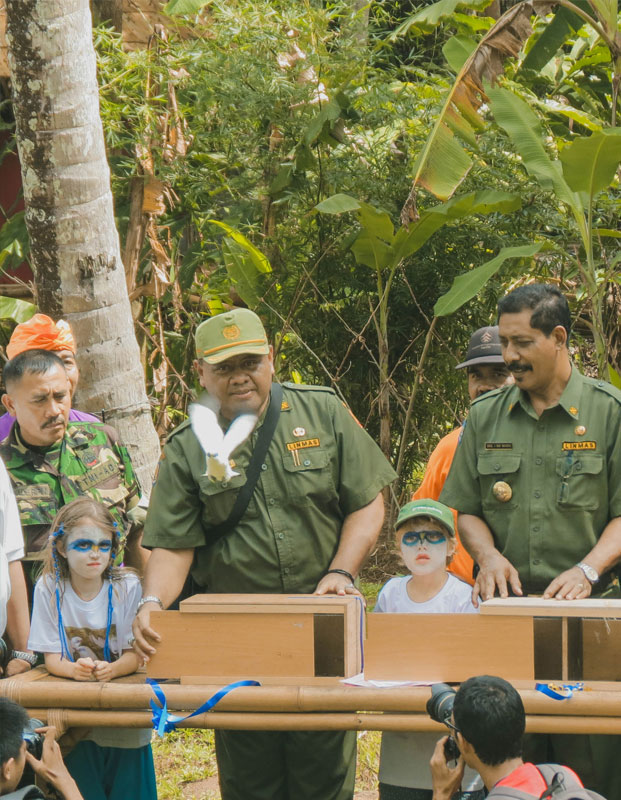 2014
June 2014
Dr. Jane Goodall, well known primatologist and climate advocate, participated in the release of two Bali Starlings. Her words, “I am so very glad you are doing what you are doing – it is so important,” echo our own feelings, with our goal to breed Bali Starlings for release back into a natural habitat.

August  2014
Ban Ki Moon, the Secretary-General of the United Nations and his wife Madam Yoo (Ban) Soon , visited Bali, opening the UNAOC (United Nations Alliance of Civilizations). They visited the Foundation’s Breeding and Release Center and released two male Bali Starlings, hoping that these would breed with the two females already out in the wild. 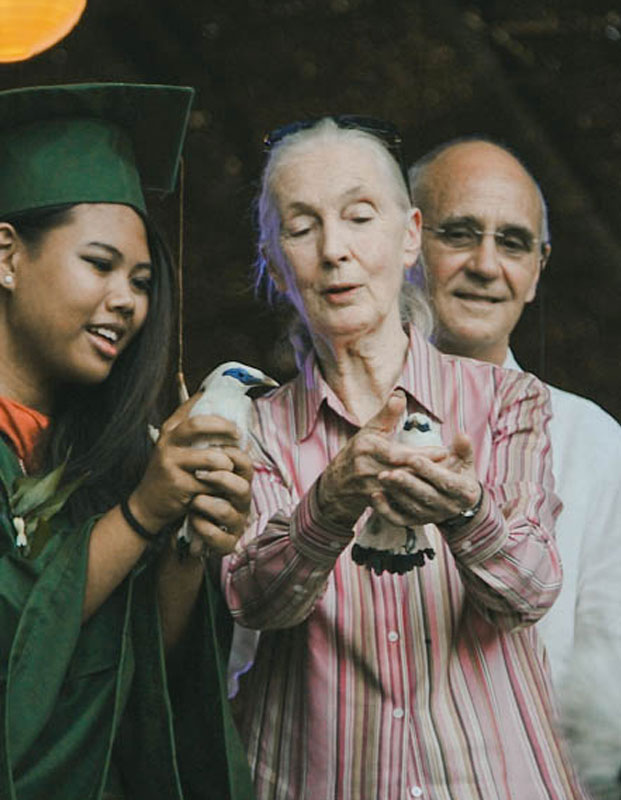 2015
Begawan took part in a multi-day international workshop on Bali Myna (Bali Starling) hosted by Bali Safari & Marine Park, alongside other influential conservation actors and organizations from around the world.

April 2015
Begawan Foundation was awarded a Tri Hita Karana Nugraha Award, being recognised as pioneers in the task of saving the critically endangered Bali Starling over the past 16 years, and demonstrating that it is possible for a private organisation to establish a reintroduction program. 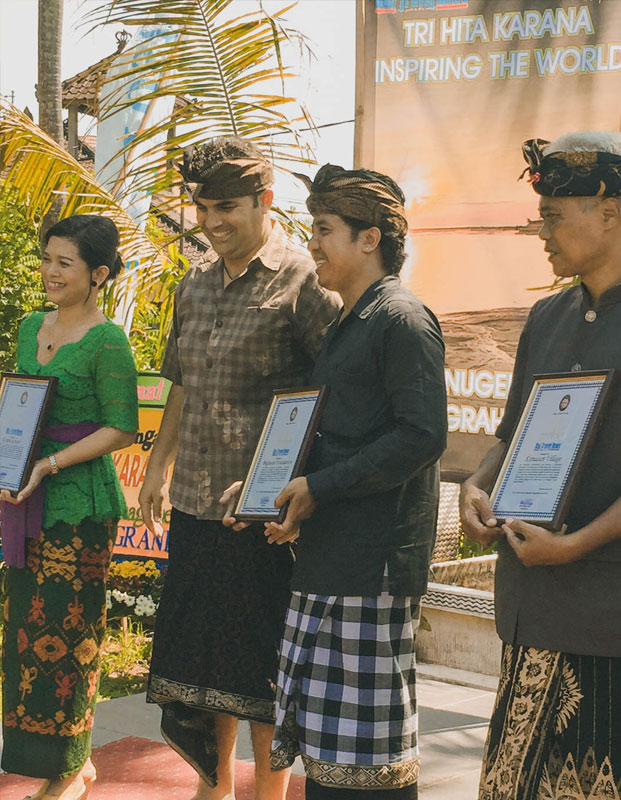 October 2018
20 birds were released by the foundation. There have been innumerable sightings of birds from a variety of sources. One pair, with its aggressive territorial behavior, has remained at the breeding site and forced other pairs to leave. The pair, however, has produced more than 13 chicks in 2021. 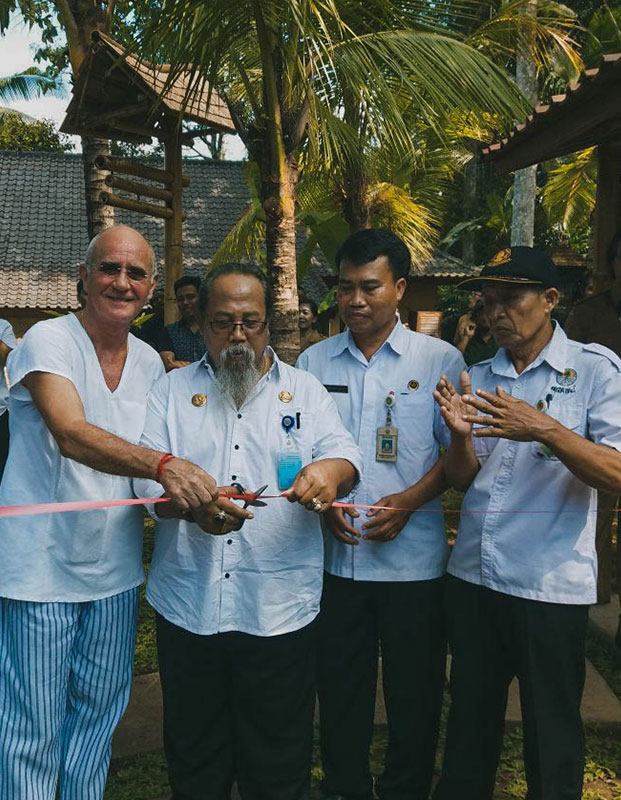 2021
April 2021
A breeding pair was released in a family compound in Begawan, and settled in a resident’s rice field near Banjar Bayad. The male bird vanished at the end of the month, most likely eaten by a predatory snake, leaving behind a female on egg. The female bird and her wild-born chick were relocated to the Breeding Centre, where she was re-paired with a new male bird and re-released.

June 2021
The single female bird and her new partner were released back into the wild in Banjar Bayad, where they had previously settled. Currently, the pair remains in the fields of Banjar Bayad, with their activities reported by the landowner to the foundation’s staff. This new pair has since fledged one chick.

A further pair was released in Begawan. By the end of the month, this pair had settled back at the site of their initial release in Begawan. After the male was killed in a fight onsite with a chicken, a new partner was provided for the male, and this pair has produced one live chick.

September 2021
A pair were released in Pengaji, Melinggih Kelod Village, Payangan. Unfortunately, the female bird of this pair vanished in late September soon after the release. The male was captured and returned to the Breeding Centre.

November 2021
Begawan currently has 14 young wild-born birds. Six of these are now ready to be released in Banjar Bayad as a flock in 2022. Staff erected a portable enclosure at the proposed flock release site for pre-release habituation and adaptation. 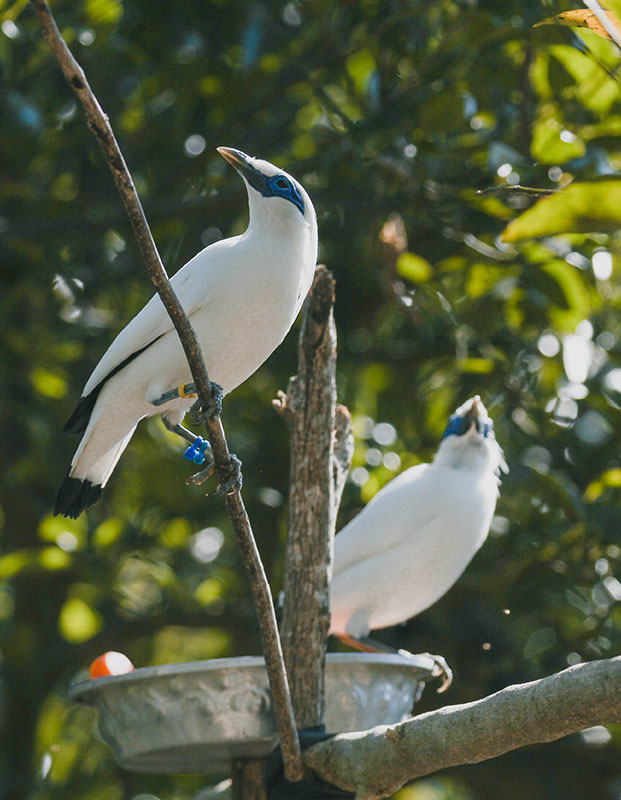 2022
Early in the year, we established a collaboration with Basebali for Begawan’s Bali Starling Foster Parent Program in Yehembang Kauh Village, Jembrana. It was started with a visit from our veterinarian to their location to ensure protection for Bali Starling by doing “Awig-awig” socialisation which emphasised how both customary and village law play a major role in supporting the success of the Bali Starling Breeding and Release Program. Thirty-five people, from government officials to community groups, attended the session and signed an agreement on bird protection in the village. Begawan equipt the Basebali team with training for Bali Starling conservation, loan them a pair of Bali Starling and an enclosure to house the birds. The goal is to release the offspring of this pair of Bali Starlings in the nearby forest where they are located.

After releasing six young Bali Starlings as a flock in April in Banjar Bayad, the Begawan team has monitored the flock regularly. Five released birds have been sighted near the rice fields, the initial release site, and local community compounds. The team then moved six other young Bali Starlings from our Breeding and Release Centre to the same habituation enclosure in Banjar Bayad. Microchips were installed on these birds, and they will be released as a flock after a few months in the habituation enclosure.

Begawan’s team is continuously planning the upcoming release of pairs and flocks for 2022. The vet has been surveying four new sites in the village to check their suitability as release sites. Later, we will install the enclosures and move the selected birds. It is our goal to establish Melinggih Kelod Village as a place where a large population of the critically endangered Bali Starlings fly safely and freely in nature! 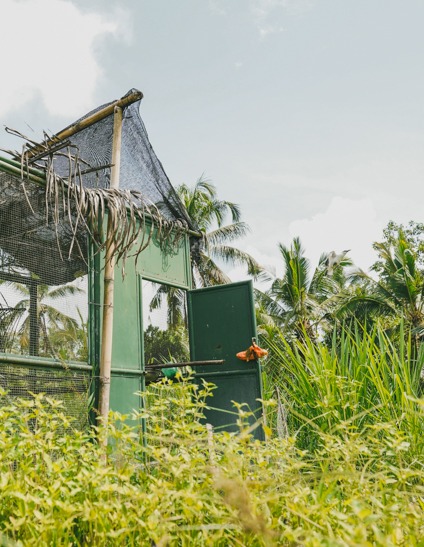 Method
Feeding
The Bali Starling is fed natural foods – papaya and banana, insect protein from crickets and mealworm twice a day, with our bird keeper prioritising birds with chicks, which get extra protein from ant eggs.
Hand Rearing Babies
Removing a Bali Starling chick from its parents is only undertaken if there is evidence that the chick will not survive.
Providing a Natural Environment
Bali Starlings are active birds that require space, privacy, and natural vegetation. An enclosure that meets the needs of the species will encourage natural behaviour, overall health, and reproductive success.
Healthcare
Our vet regularly examines the birds to detect parasites, infectious diseases, and metabolic diseases.
Egg Laying / Hatching Period
The Bali Starling lays 2 or 3 small blue eggs, which hatch in 14 days.
Growth of Feathers
Naked and blind, their parents must constantly feed and warm them until they start to grow distinctive white feathers.
Fledgling
At one month old, a chick is old enough to be called a ‘fledgling’ and will start to fly out of the nest boxes.
Release
The aim of the Bali Starling program is to safely release captive birds involving key local community members and government department officials. 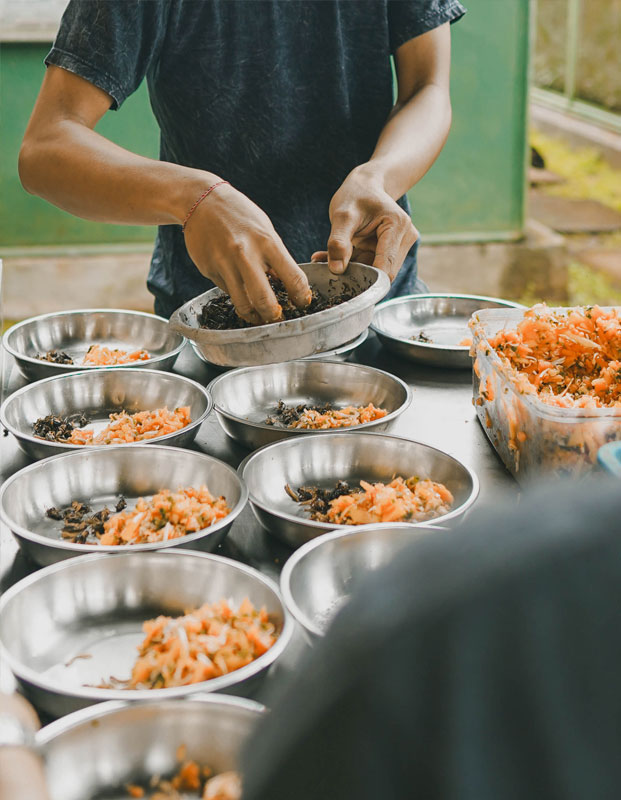 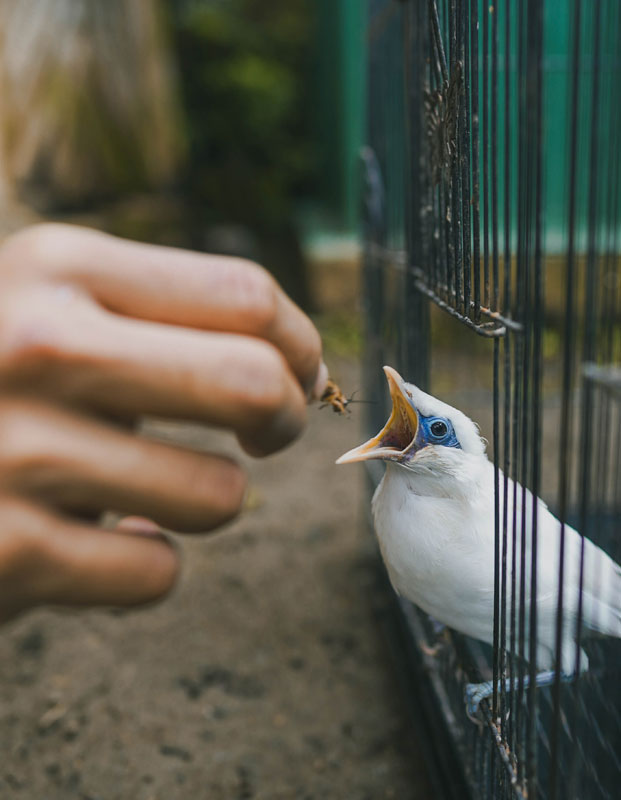 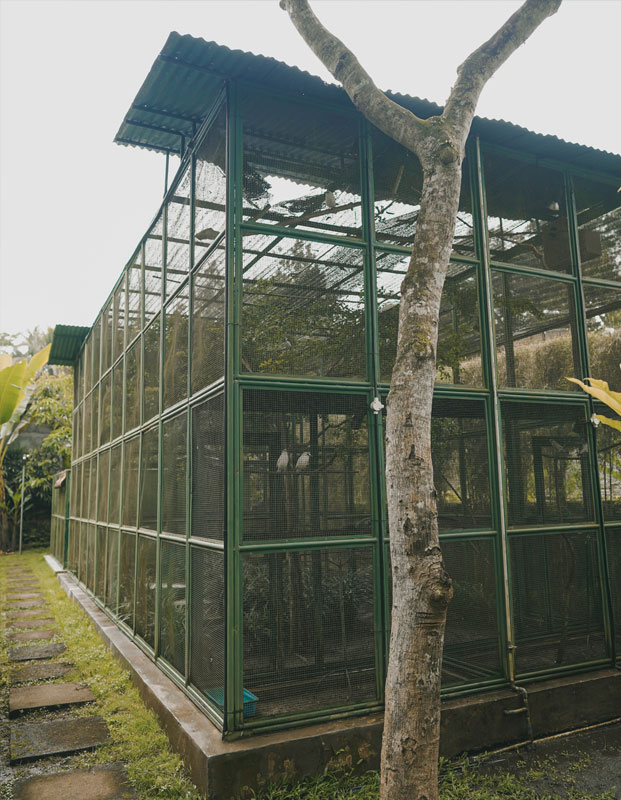 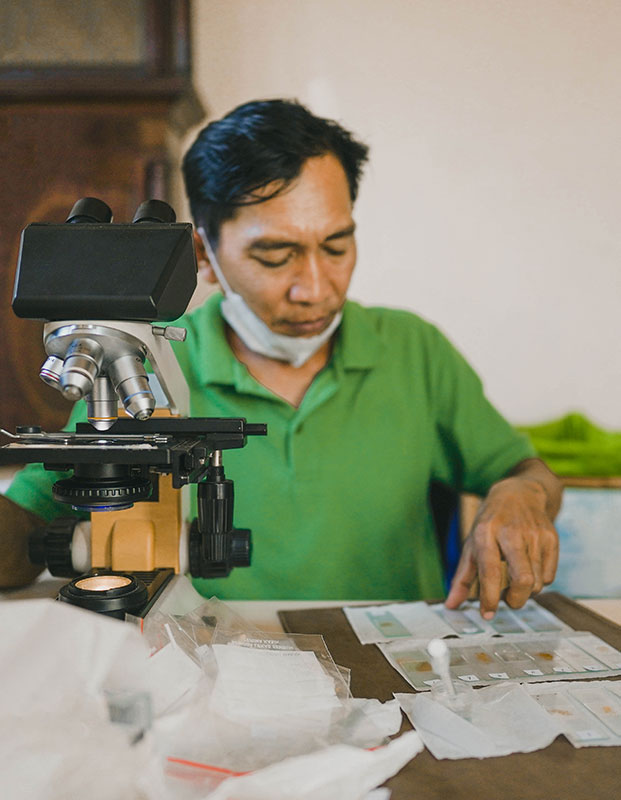 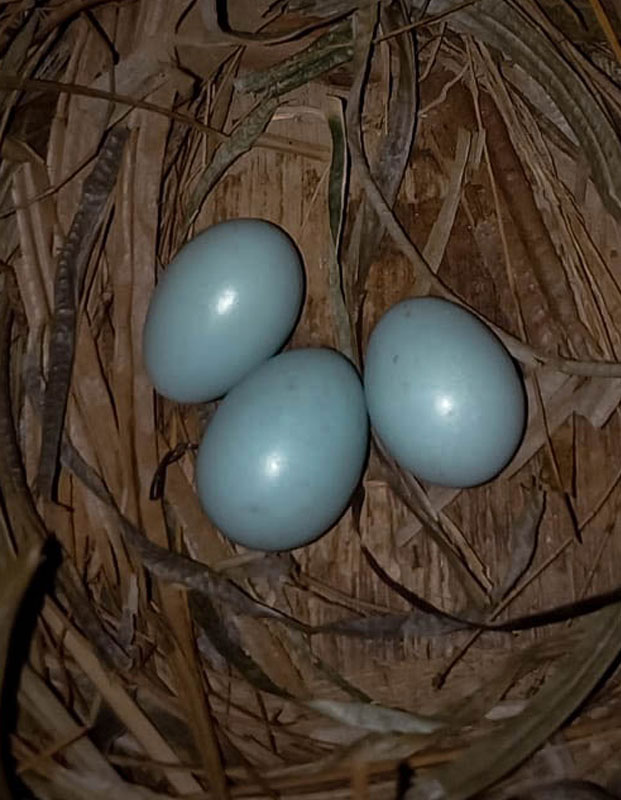 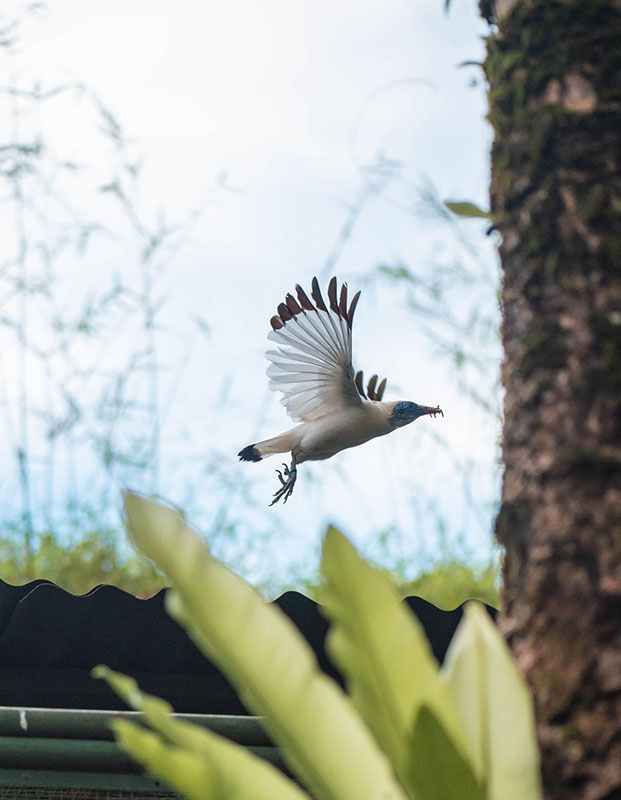 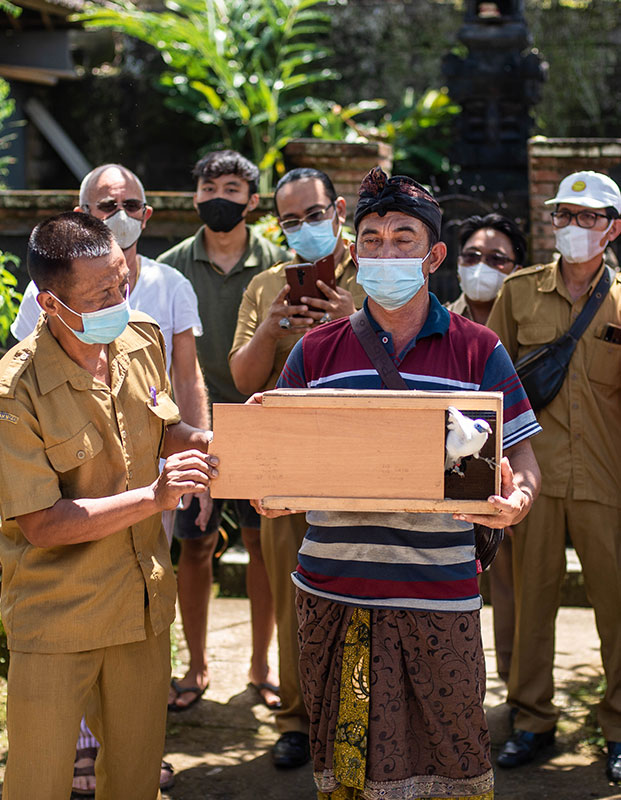 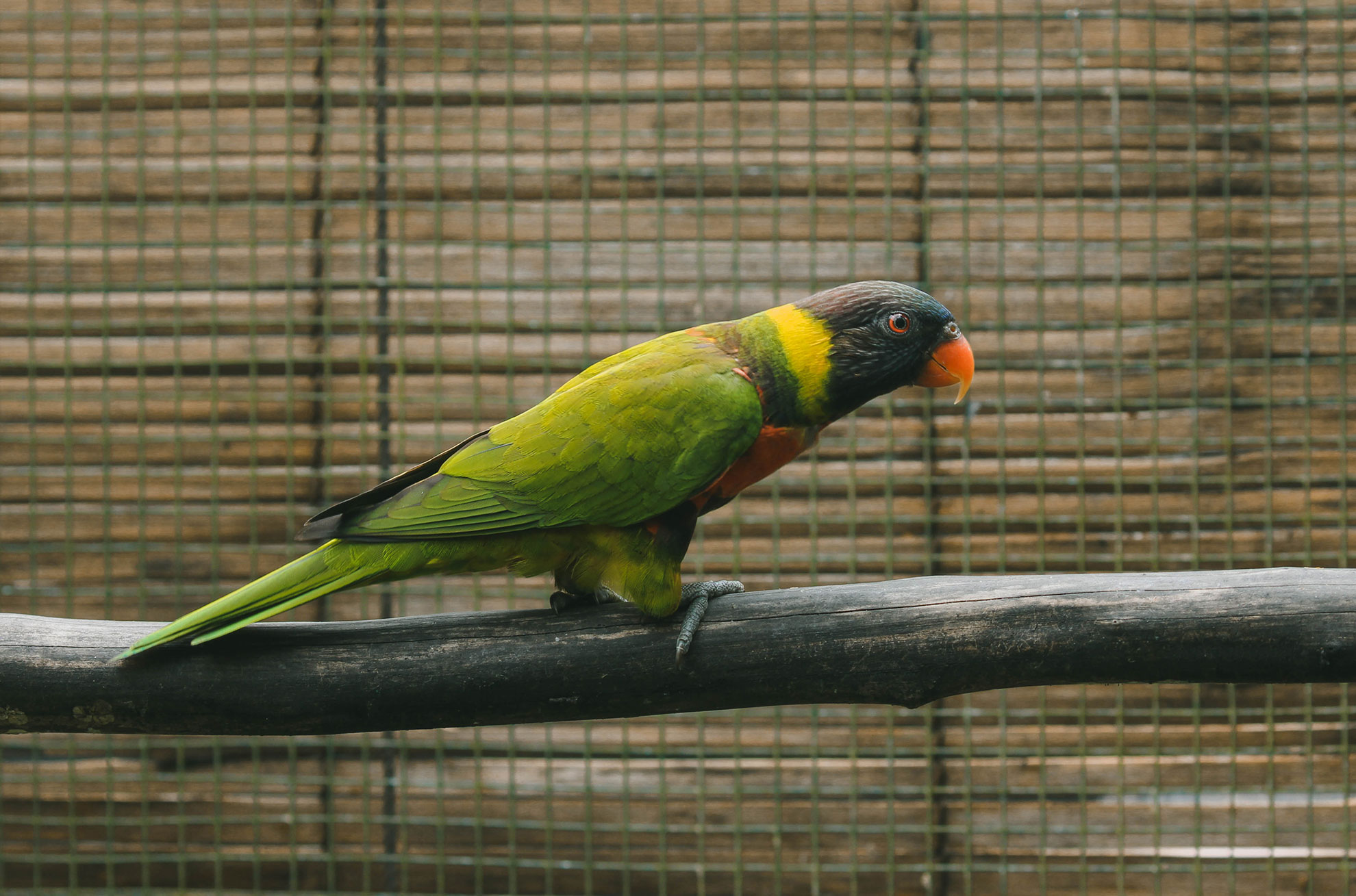